The oxymoron embedded in the title reveals the contradiction behind any attempt to “visualize” oral history for historical curation. One could argue that oral history and, more broadly, sound, are such fundamentally aural experiences that they can’t be visualized at all. Even so, for historians, the meaning and magic of oral history has been long hidden behind the veil of the visual. Typically this has happened through representing oral history as text transcription or encased in long-form video interviews. Sadly, such presentation prioritizes one sense–sight–above the others. This point was clearly made in the emergence of sensory history and has more recently been emphasized by oral historians seeking to recover the meanings embedded in the aural experience and expression.

Digital practice has uncritically adopted that trope in discussing and valorizing evidence for historical curation. And, arguably, our efforts to deal with visual evidence in archives, online exhibits, and other presentation have far outstripped our work in dealing with sound (much less the other sensory-based) materials. To a degree, this is ironic because some of the premier digital tools that have so altered daily life–cell phones and portable music players–have their origins in transforming voice and sound experiences, making them pervasive and deeply individualized.

The curatorial challenges facing how we curate sound materials can be suggested by highlighting some well-known digital oral history projects and newly emergent tools for curating oral history.

On public radio, we regularly hear the moving narratives collected as part of StoryCorps. StoryCorps reveals the extraordinary power of oral history, with those so-called driveway moments in which we find ourselves listening to StoryCorps interviews on National Public Radio. Developed as a way to document America, ala the New Deal WPA projects, StoryCorps was primarily designed for radio audiences, but it also captured some of the ethos of the digital age, with individuals using the scripts and approaches suggested by StoryCorps to interview people well known to them. Long before the term crowdsourcing emerged, StoryCorps had set about capturing narratives by empowering ordinary folks. Even so, StoryCorps has been criticized by oral historians for its methods, especially the lack of training of interviewers and conversational quality of the materials collected.

Though these critiques bear merit, it is perhaps StoryCorps’ major failing that the project has relegated most of its born-digital oral histories to an archival Hades in which they are accessible, with some exceptions, only through a visit to the Library of Congress. Only small snippets of interviews, generally those chosen for radio, appear on the project Web site, which promises to archive the materials, never mentioning a more sophisticated approach to making them discoverable in digital environments. Imagine, if you will, more than 40,000 hours of oral history from across America stuck in a server, unavailable, and disconnected. This is not the fault of the Library of Congress or StoryCorps’ funders, but the project itself. By prioritizing collection over curation, StoryCorps provides a model of opportunities lost.

By contrast, the Veteran’s Oral History Project (VOHP) has taken a more sophisticated approach to crowdsourcing and curation. Like StoryCorps, VOHP collects materials from the crowd, but provides a detailed training kit that emphasizes the collection not just of the story but metadata surrounding it. Even better, VOHP takes the processing and archiving of the oral histories seriously. As digital objects, the oral histories can be discovered and searched, though only at the interview level (with some exceptions.) In so doing, the American Folklife Center at the Library of Congress shows us that curating and connecting people to oral history is as valuable as the collecting process.

The Historymakers project offers yet another view into how we might process and connect oral histories. Distinctive for methodically having collected over 8,000 hours of interviews with African-Americans, Historymakers is also distinctive in its sophisticated approach to digital archiving, creating archival meaning and linking at the level of the audio segments (as opposed to just the entire interview), including common-sense indexing. Developed with desktop tools, the index is not publicly available, but the project nonetheless points toward a future in which oral history is indexed and connected in more sophisticated ways.

Indeed, over the last decades new techniques, such as those from Mike Frisch and his team at the University of Buffalo’s Randforce Associates, have emerged for processing and imagining oral history. These techniques use common-sense tagging and interpretive metadata that is associated not merely with an entire interview but with particular clips. Moreover, indexing interviews in this way creates a network of meaning that crosses interviews and collections.

Following Frisch’s theorizing, oral history centers have explored the development of new tools that provide for the richer production of meaning within and across oral history collections. These endeavors have taken different forms.  Concordia University’s, Stories Matters Project, follow’s Frisch’s models. It allows users to create clips according to personal and/or interpretive criteria, and then create personalized playlists of clips that speak to specific themes.  The Nunn Center for Oral History at the University of Kentucky created the OHMS tool that allows for transcription and indexing of interviews within ContentDM environments, which connects audio to searchable transcripts/indexes. More recently, Annotator’s Workbench, a tool for ethnographic research developed at the University of Indiana, obtained an NEH ODH start-up grant to connect its tool to Omeka databases. Meanwhile, my research colleagues at the Center for Public History + Digital Humanities, have been exploring a hybrid approach that would involve indexing interviews in Google documents and then creating compound archival objects in Omeka that would link audio indexed thematically to archive sound. The list of innovations in this category is expanding dramatically, and I expect that we’ll see lots of new and exciting work in this area over the next 24 months.

More recently, technology projects have been exploring how another generation of digital tools, in particular mobile technologies, could use oral history as the basis for a richer interpretive. These include mobile-based projects like the beta effort at Broadcastr, which seek to link oral testimony to place through crowdsourcing the collection of memories. Unfortunately, creating sophisticated approaches to metadata to make such memories discoverable does not appear to be part of the project. However, there is now doubt that sound can be used to recover place in dramatic ways as I’ve learned through our efforts with the Cleveland Historical Project to curate cities in mobile environments using oral history. Listening–not just reading text or looking at photographs–can offer evocative sensations of place. Indeed, Halsey Bergland’s Scapes Project might offer the best example of how sound curation can transform a museum exhibit.

Meanwhile SoundCloud is a tool that has been built for curating sound. In addition to making sound sharable, SoundCloud has a variety of features that include: an open API, an emphasis on social sharing, pervasiveness on multiple platforms, and allowances for community commenting on sound clips. Like scholars’ efforts to curate oral histories at the segment or clip level, SoundCloud allows users to connect to sound and oral history at the level of meaning through rich annotation. Moreover, because SoundCloud files can be embedded into digital projects, it allows for rich use of sound both to build community and to explore how communities can contribute to interpretive digital humanities. Finally, with an open API, SoundCloud is being extended into a variety of ancillary sound projects making it a potentially valuable tool in the digital humanities.

If no single best practice has yet to emerge from these various efforts, we can see the outlines for how we might think about curating oral history in a manner that offers a richer perspective on sound. These points of agreement might include some of the following: a) recognition that oral history is fundamentally an aural experience and not just a text experience; b) oral history should be evaluated for meaning at the clip or segment level, not just at the level of the 60-minute or 90-minute interview; c) clips and segments should be connectable across interviews, collections, or archives; d) our metadata schemes, as well as our work in representing oral history to public audiences, have to account such rich metadata schemes (think linked open data); e) collecting oral history is one thing, making it open and accessible is another goal—and one that the oral history community should embrace; f) efforts at linked open data have to account for segment- and clip-level metadata; and g)  it is vital that we involve communities in processing and connecting to oral histories together, just  as we are learning to involve those same crowds in collecting oral interviews.

As for the other senses, I fear that the literature is less well developed. And although I can’t imagine how the digital age will recover smell, the advent of three-dimensional printing might soon present a new tactile experience in which historical artifacts could be reprinted and re-imagined in physical space.

That said, perhaps I protest too much about the over-emphasis on visual metaphors in our digital humanities conversation. I might be a bit like Cassandra, and sort of like the musicians who organized to protest against recorded sound in the 1930s. (On the image below, and those protests, check out this dandy link from Smithsonian.com.) 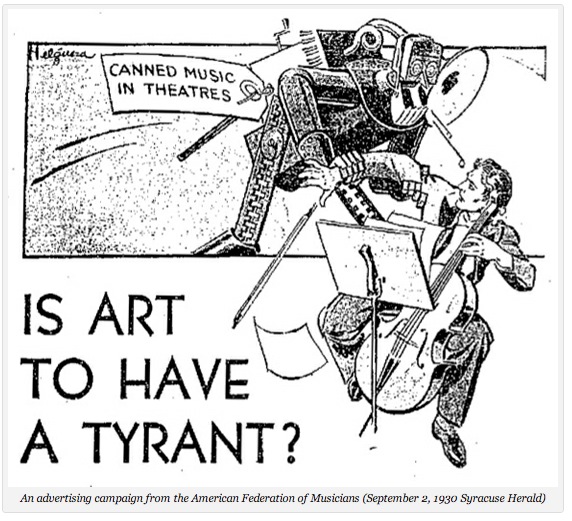 Permanent link to this article: http://ohda.matrix.msu.edu/2012/06/visualizing-oral-history/