Michael Frisch is Professor of History & American Studies/ Senior Research Scholar at the University at Buffalo, SUNY. He is an American social and urban historian involved for many years in oral and public history projects, often in collaboration with community history organizations, museums, and documentary 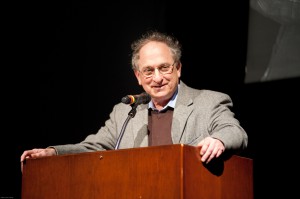 His work in oral history applications of new media technology has been developed through his consulting office, The Randforce Associates, LLC, in the University at Buffalo’s Technology Incubator. Here, he has been a partner in five current or recently completed IMLS National Leadership projects involving digital oral history content management, , including OHDA. His applied practice has led to a series of major publications, most recently (co-authored with Douglas Lambert)  “Beyond the Raw and Cooked in Oral History: Notes from the Kitchen,” in Donald Ritchie, ed., The Oxford Handbook of Oral History (NY: Oxford University Press, 2010)  and “From A Shared Authority to the Digital Kitchen, And Back,” in Bill Adair, Benjamin Filene, and Laura Koloski, eds., Letting Go? Sharing Historical Authority in a User-Generated World (Philadelphia, The Pew Center for Arts and Heritage, 2011).

Permanent link to this article: http://ohda.matrix.msu.edu/about/authors/frisch/