Aspect Ratio: The ratio of width to height with regard to a frame of digital video. Common Aspect Ratios for digital video include 4:3, which is standard, and 16:9 which is widescreen and commonly high definition. Widescreen video is often “letterboxed” to present a 16:9 video on a 4:3 screen. And there is a process, called anamorphic, which describes how you squeeze a 16:9 video frame into a 4:3 format but then expand the video to 16:9 on the screen. This was commonly used to present 16:9 produced video on DVD which was designed for 4:3 screens. [Video Glossary] 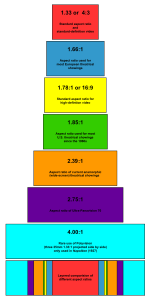 Permanent link to this article: http://ohda.matrix.msu.edu/gettingstarted/glossary/videoglossary/aspect-ratio/