In Our Own Words: Portraits of Brooklyn Vietnam Veterans, an exhibition featuring oral history, opened at Brooklyn Historical Society (BHS) in December 2007 and ran through April 2011. In that time, hundreds of visitors, including high school, college, and graduate students, as well as veteran’s groups, came to hear the stories of sixteen people from Brooklyn who served in the Vietnam War. You can read these reviews of the exhibition to get a sense of the visitor experience: The New York Times and The Journal of American History (pdf).

This exhibition began taking shape when Deborah Schwartz became President of Brooklyn Historical Society in 2006: she was interested exploring the use of oral history in museums  to engage audiences in learning contemporary and contested history. Meanwhile, also in Brooklyn, Philip Napoli, Professor of History at Brooklyn College (CUNY), had been collecting oral history interviews with Vietnam veterans since 2001 for his book tentatively titled Voices from Inside the Wire: Oral Histories from New York’s Vietnam Veterans (forthcoming from Hill and Wang, Spring 2013). President Schwartz initiated the collaboration and plans moved forward with the curating expertise of Kate Fermoile, then Vice President for Exhibits and Education at Brooklyn Historical Society, and Alison Cornyn, photographer and founding partner of Picture Projects, an interactive media and exhibition design firm.

I became involved in the project towards the end of the planning process. This was the first public history exhibition I worked on (my background is in feminist qualitative research and radio), and what I learned has shaped every oral history project I have been a part of since. Napoli, Fermoile, and Cornyn took very seriously the title “In Our Own Words” and involved the narrators in all stages of interpretation and curatorial decisions from reviewing their audio portraits, to choosing locations for their photographic portraits, and selecting objects for their artifacts displays. In return, the narrators felt ownership of the exhibition, frequently bringing their family, friends, coworkers, fellow veterans, and younger veterans of conflicts in Iraq and Afghanistan to experience the exhibition. Remarkably, the narrators remained engaged with public programming and educational events for the more than three years that the exhibition remained up. 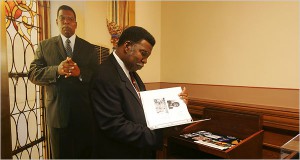 All of the narrators had signed releases and Napoli held the copyright of the interviews, so, with his approval alone the exhibition could move forward – but the curating team chose to hold two listening sessions and invite all of the narrators to hear and review drafts of their audio portraits.

I was charged with editing the audio portraits – whittling down selected stories from long interviews into produced pieces that would play when visitors stepped on a footpad, which triggered the hypersonic speakers overhead. If you’ve done audio or video editing, you know how deep into it you can go, worrying over a pop or click that is less than a tenth of a second… When the team told me they were going to give the narrators a chance to review their audio portraits and suggest changes, I balked: this could mean months of work down the drain! And the exhibition opening is weeks away!

But I also understood the importance of making sure the narrators were comfortable with the way in which their private experiences and memories were going to be made public in this exhibition.

At the first listening session, half the narrators and other people involved in the exhibit gathered around a table and the first audio portrait we listened to belonged to Anthony Wallace. The edited excerpt from his oral history was about how he handled his survivor’s guilt upon returning home.

The room was completely silent for several seconds after Wallace’s audio portrait finished. When Wallace responded, he said that hearing his own story like this made him “feel naked.” He agreed that this was the most powerful story that he shared during his oral history interviews, and also agreed it was a good selection to be featured in the exhibition. He knew that his story would be helpful for someone else dealing with similar feelings to hear. Wallace attended every event held in conjunction with the exhibition and frequently added thoughtful and important comments to the discussions – continuing the community healing work he recognized he was undertaking by allowing his story to be made public through the exhibition.

Joan Furey’s response to her audio portrait illustrated for me that no matter how knowledgeable we are of historical events nor how empathetic we are to someone’s personal experience, we cannot assume to completely understand her subjectivity.

Joan Furey was a nurse in Vietnam and in her audio portrait she talks about dealing with mass trauma at an Evac Hospital and how she learned to cope with that incredibly overwhelming situation. This particular mass trauma experience was on Furey’s first day, and “within two weeks, you’re dealing with it all,” she says. In the original draft of Furey’s audio portrait, we did not include that line about it being her first day and Joan’s feedback after hearing the draft was that we better edit it back in. It was important to Furey that listeners understand that this was her first day because the way she initially connected to patients, the way you would in a normal emergency room and not a mass trauma situation, is something nurses, doctors, and other emergency responders quickly learn not to do in these mass trauma situations where there are just too many people. Interestingly, when I went back to the original recording to re-include Furey stating that this was her first day and “within two weeks, you’re dealing with it all” I had a hard time finding the clip. The way Furey remembered telling Napoli the story (chronologically, setting the scene) is not the way she actually told it in their interview. Eventually, I did find it in a later interview session where Furey refers back to that story. Adding this clip to the beginning of the audio portrait, even thought this is not the way the story was told during her recorded interview, is more true to her intended meaning. Furey, like Wallace, recognized the power of including her personal story in this public exhibition and she also participated in many exhibition-related events including the powerful panel discussion Women Veterans: Citizen-Soldiers in Changing Times (March 2009).

To hear more from these narrators about  their experiences being part of this exhibition you can watch a panel discussion hosted by Philip Napoli and moderated by Amy Starecheski: The Impact of Listening and Being Heard (Thirteen Forum). Participants include Dr. Herbert H. Stein, Director of the PTSD Clinical Team at the Veterans Affairs Healthcare System in Brooklyn; Vietnam nurse Joan Furey, and Vietnam veterans Neil Kenny, Rudy Thomas, Tony Velez and Anthony Wallace.

Looking back, it seems completely logical to involve the people whose stories were the foundation of this exhibition in the planning process – but this does not always happen. It took effort and integrity to continually maintain open dialogue with narrators during the curatorial process, especially with deadlines approaching. Theoretical questions of authorship and authority aside, sometimes just the logistics of handling multiple people and opinions can be enough to limit this kind of true collaboration. It was especially hard to maintain a commitment to giving everyone a voice in the discussions when it wasn’t always clear what an incredible strength this would give to the resulting exhibition. Now I know that narrators offer insights that the curatorial team could never have come up with on our own.

Permanent link to this article: http://ohda.matrix.msu.edu/2012/06/involvingnarrators/