“Green Screen”: A video technique that lets you replace the solid green background used in a video of a person (top picture) with any other custom background (bottom picture). Software replaces each green pixel with the corresponding pixel from the custom background. It provides the illusion of location. It is more commonly know as the system used by television meteorologists but often used in documentary production. Otherwise known as “Chroma Keying” [ Video Glossary ] 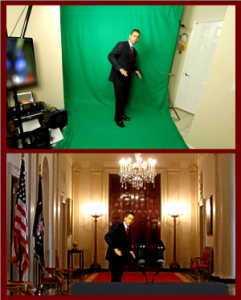 Permanent link to this article: http://ohda.matrix.msu.edu/gettingstarted/glossary/videoglossary/green-screen/